You may hear us mention frequently that Mountain City Candle Co. candles "burn clean".  But what does that actually mean?

All candles produce soot, and if you are a candle lover, you're familiar with the thick black smoke ring that gathers on the inside of your candle glass.  It can leave residue on the walls, ceiling, and your hands when you light the candle.  Candle soot is dirty and unattractive.  But is it unhealthy?

Soot is the byproduct of an incomplete candle burn.  It is mostly unstructured carbon realized as a black powder substance.  Anything at all that you burn will produce soot in some fashion.  But again, is it harmful?

First let's consider soy wax vs. paraffin wax.  Soy is made from beans, paraffin is a byproduct of petroleum.  Just looking at the words "Beans" vs. "Petroleum", many people assume that the plant based wax is "better" than the other.  And here's my 100% honest opinion:  I have no idea if paraffin wax is more harmful than soy wax.  But a solid fact that I have learned through my years of candle testing is that a paraffin candle definitely produces more black soot than a soy wax candle.

There is an insane amount of conflicting information out there about the healthiness of candle wax.  One article will say that paraffin wax = bad, and soy wax = good, and it will throw around words like "toxins" meant to scare us.  Another article will point to scientific studies that show that both are equal and they both produce identical emissions.  Some people believe that big candle production companies started the paraffin vs. soy debate simply to scare people into buying their candles instead of traditional paraffin candles.

The National Candle Association (NCA) in Washington, DC, will point to this international study that finds that any well-made candle exhibits the same clean burning behavior that poses no risk to human health or air quality.  People reference this article all the time to show that all quality candles are equal.  But soy wax wasn't part of this study:  only paraffin, beeswax, and stearin (tallow, which isn't really used much anymore).  The bottom line showed that beeswax had lower emissions than the other two, but none of the candles had enough emissions to be harmful.

Of course the additives used in candles will change the properties of the candle emissions, and you just never know what kind of additives people are putting in their candles.  Ultra violet light absorbers, stearic acid, vybar... these really required their own blog post (which I'll work on later).  The most important take away here is that Mountain City Candle Co. does NOT use additives in our candles.

I personally believe that burning quality candles in your home is safe, and they don't produce enough emissions to have an affect.  Soy, beeswax, paraffin... I don't think the type of wax used in candles has a direct impact on our health.  But I definitely believe that soy wax candles, when trimmed to 1/4" before each burn, will burn cleaner than traditional candles, leaving behind very little soot and a mostly clean candle jar.  And I believe that different additives that candle makers use has a direct impact on the emissions of a candle.

The best, most truthful facts that I can list are that Mountain City Candle Co.:

Mountain City Candle Co. chooses to use Soy wax because:

And, we use soy wax because, well, why risk it?  With so much conflicting information out there, I'd rather play it safe.  Our candles are high quality, hand-poured candles that are used daily in my own home.  You don't need to worry about harming your air quality with Mountain City Candle Co. 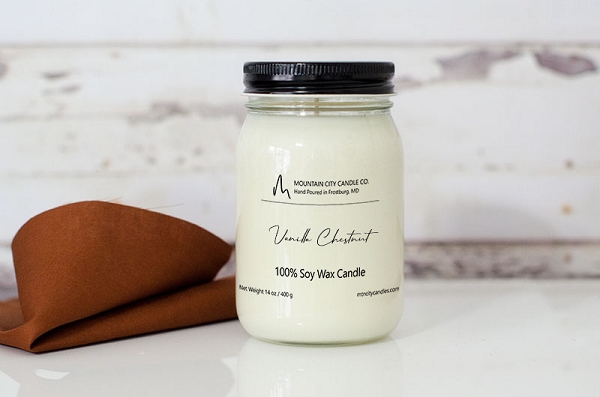 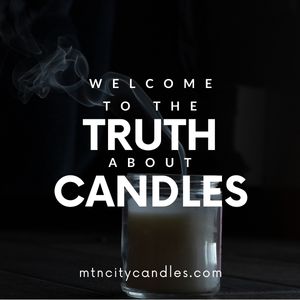 In this blog, I'll be laying out all the most important things you need to know about candles. Straight talk and no-nonsense—you're going to get it all right here in one spot. You'll find extensive information on different types of candles and why people buy them, making candles the right way, and the products we offer for sale. Feel free to comment & share. From one candle lover to another, I'd love to hear how you feel about what you read here.

In this blog, I'm going to tell you the truth about candles. There's a lot of misinformation out there, so it's important that we get this right.

All candles are not created equal, and you can't tell the difference between a great candle and a crappy candle just by smell or price. Big box store candles are typically mass-produced and even though they may say "soy" on the label, it doesn't mean that they are only soy.

You’ll find no-nonsense candle facts in this blog. I research first and then form my own opinions. I’ll tell you the simple truth always because I'm just a small-town girl running a small business, and the truth is the only way a small business will thrive. And I love candles. I love making them, burning them, selling them, and helping others learn about them.

From one candle lover to another, please comment, share, and let me know how you feel about what you read here.